Today has been a very constructive day all round methinks. I managed to get  a good bit of work done before they got up which I wrapped up while they had a go at a new game.

Boykin moved on to the next page of angles which introduced the beginnings of bearings. The Girl worked on compound growth.

After that, I took The Girl to her auntie's where she worked some more on her Silver Arts Award project. It's very nearly finished now , it needs sanding and waxing. She's obviously really enjoyed herself and has decided that she wants to do more woodwork for the skill section for her Silver D of E. Such a lovely opportunity for her to hang out with her auntie and learn some stuff at the same time :)

While she was away, me and Boykin read the next chapter of his Galore Park science book, which reminded him of one of the lessons we had previously done on the Mystery Science website. I logged on there and we did another section. It's not a bad site, aimed at 7 - 10 year olds and available for free until the end of this school year. After watching the relevant section, we completed one of the suggested activities, making a root viewer from an old CD case. There is also an accompanying recording sheet where he had to draw a detailed sketch of one of the seeds. 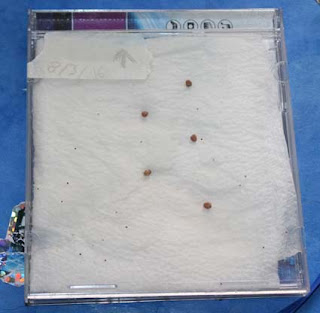 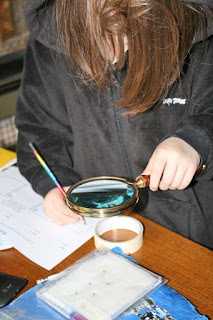 The science bug had got hold of The Boy and he started off the Grow Your Own Crystal Garden kit that he got for his birthday. Both these experiments are currently set up with a video camera on them doing time lapse photography. I'm looking forward to seeing the results :)

After all the science, we had a look at the Photography for Kids course that I bought for £6 on Udemy.  He watched the first two lectures and declared it "amazing". That was just the introduction to the course and a brief potted history of the camera. Each lecture lasts no more than 20 minutes by the look of it and practical activities start on the 4th lecture (I think).

I collected The Girl, admired her woodworking skills, and then sent her off to strings. While she was there, I made a small child's shopping bag, intending to sell it on the stall we'll be holding at the Scouts coffee morning on Saturday. I learnt that tacking saves time - or at least, it would do if I had bothered to do any :/

Email ThisBlogThis!Share to TwitterShare to FacebookShare to Pinterest
Labels: general HE, life in general, science