Monday.
It was a bit of a funny old day today, mostly spent in pyjamas. The morning seemed to pass very quickly without any real sense of achievement. Both kiddos did maths. Boykin has been working on enlargement, congruent shapes and area which he quite enjoyed, especially as it meant getting the pattern blocks out. 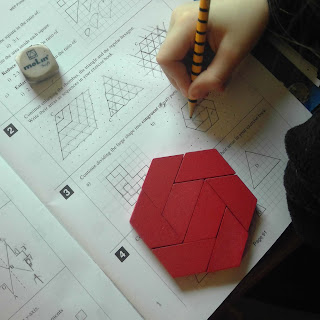 The Girl was revising Standard Form.

There was some music practice and cooking on their part and some washing up on mine.

They listened to the next chapter of The Story of the World: Volume 2 which introduced the Jewish Diaspora.

There was a new Photoshop game happening whilst listening to SOTW. Boykin asked us all to put two crazy ideas for images down on slips of paper. These went into a hat along with each of our names. The person whose name was drawn had to create a PSD using photographs and Photoshop edits to depict the image suggested on the other bit of paper which had also been drawn out of the hat. There are still works in progress :)

Boykin also did another section on Mystery Science   and did the next lesson of his Udemy course.

Then it was guitar lessons, singing lesson, tea and an episode of The Waltons - Season 2. Early nights all round tonight :)

Email ThisBlogThis!Share to TwitterShare to FacebookShare to Pinterest
Labels: general HE