A Home Ed day in photos

Merry at  A Patch of Puddles is hosting a blog  carnival of Home Ed days in photos. I thought it might be fun to join in :) So here goes.....

Toss-the-teddy maths - Boykin working out the answer to an equation before he 'throws' the answer back with his teddy. We do MEP maths and this is a regular activity in Yr 1 - although they suggest using a soft ball......

The Girl does her own maths quietly behind him

Now he's learning all about the number 10

The Girl learns her 6x table singing along to musical times tables tape. It worked. She knows them now. (And yes, I did mean a cassette tape - that probably comes under history these days, doesn't it?)

Collage making for our FIAR book Miss Rumphius was interrupted by the postman delivering a storage box for Boykin's Storybox magazine.

We decided to look at jungles/rainforests for Miss Rumphius which prompted Boykin to get out the Tiger notebook we made when we won a DnG giveaway :) He also got Wee Gillis (another FIAR book) out to read again in and amongst this but I failed to take a photo.
Back to the collages whilst listening to me read a chapter of The Silver Chair

Then it's time for kitchen jobs while I make lunch

After lunch there's just time for a bit of music...

The wee boy helps me make tea, chats about Doctor Who LOTS and then gets ready for Beavers 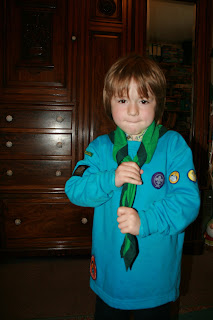 At Beavers he planted cress and brought it home so that he can keep a seed experiment growing record (nice timing for Miss Rumphius). At Brownies, The Girl learnt how to play touch rugby with a member of the local rugby team.
Then it's all home for supper and stories and bed :) Tonight's stories were another chapter of The Silver Chair, Aliens Stole my Dog, Pollyannna and today's poem from Read Me Out Loud.
I've really enjoyed trying to do a whole day's post in photo's. It helped me to realise just how much we get done even when we seem to be doing very little. Of course, the photo's don't show the conversations and the franticness of trying-to-get-somewhere-on-time-for-once cos Boykin refuses to put his shoes on and The Girl is halfway through a song and hasn't got her cornet together yet...... But it was a pretty good day for us and the kids were interested in the idea of having a full day in photo's. Maybe this is something to do again :D