The Boy has football club at the local infant school on Tuesdays but apparently today's lunch by The Girl wasn't in anyway connected to this :0) 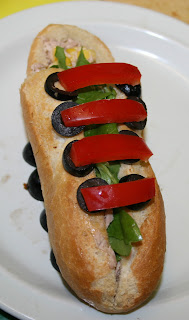 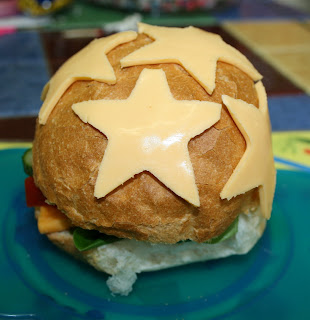 Lovely football sarnies adapted from The Girl's favourite cookbook:0) The boot is filled with tuna, sliced spring onion and sweetcorn all mixed up with mayonnaise, topped off with baby spinach leaves. The trick is to scoop out the bread so that your filling fits inside and doesn't dribble all down the sides like mine did. Bootlace holes are made out of sliced black olives with red pepper laces. Boot studs are halved olives too.
She filled the ball for The Boykin with cheese - has to be Red Leicester or he won't eat it - and the same salad-y bits as the boots plus cucumber. The Girl had lots of fun making them and we all hd fun eating them - even if  mine was a wee bit messy (rolling eyes).


Before lunch we actually got some other stuff done. Boykin did half a page of French and started his new maths workbook. He's on Yr 1b and very excited by it :0) The Girl read about 3 chapters of her latest library book and finished the maths page she started yesterday. They both did some Mega English - Boykin was working on consonant cluster word endings and The Girl was learning about comparative and superlative adjectives. Then they decided to give me a lovely concert which was a great excuse to leave the washing up til later ;0) 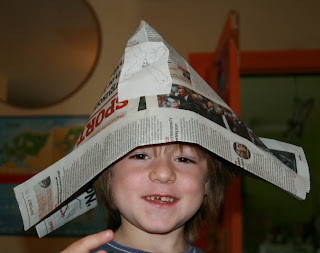 ....and trying to retrieve rabbits from under bushes. There are no photos for that and there was very nearly no bush!