The Girl's still cooking and loving it :)
Today we had Chinese stir-fry - her first veggie meal. It was delicious. The egg part is made into an omelette first and chopped up to go into the veg and rice. We were particularly impressed by the addition of soy sauce to the egg mix. So much so that there wasn't nearly as much egg in the stir-fry as there should've been ;) 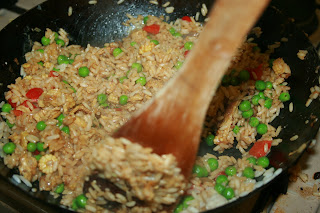 The instructions in her new cook book said to cook the rice as it said on the packet. After a brief 'discussion' I convinced her to cook it the way my SIL, H, told me :-

Put rice in a saucepan.
Cover to twice the depth in COLD water.
Put a lid on the pan and bring to the boil.
Immediately switch of the gas (I reckon  if you're cooking electric it's probably better to move it to a different ring)
Leave the lid on the pan. DO NOT take it off!!
Leave for about 20 minutes (or as long as it takes a smallish person to chop veg and stir fry it)
Take the lid off the pan and - voila! Beautiful unsquidgy, fluffy rice :0)
So much better than the pans of mush I used to produce that needed rinsing about 5 times in boiling water to be edible.

The Girl's review of this book so far, which is entirely her own is "It's worth the money. I like how it shows you pictures of the ingredients before you put them in so you know you've got the right stuff"