This is only our third attempt at a Five in a Row book. And I'm pleased to say it went really well :0) I did it as a project just for Panda and it was much easier to keep his interest and enthusiasm high. We did Wee Gillis by Munro Leaf. (Incidentally, our first successfull FIAR book was The Story of Ferdinand by the same author.) I managed to get the library to purchase it for us. It was so lovely to be the first to read a brand new library book :0) If you can't get hold of it, there's an online illustrated version complete with a translation in an Asian language that I don't recognise :0/
It's a lovely story for reading out, plenty of opportunities for him to act it out :0) He looked forward to hearing it every day and was keen to do the activities suggested in the FIAR Vol 2 manual. For the fifth day science activity though, I changed it. Instead of sheep or fog as suggested in the manual, we looked at lungs. It was more appropriate for my son who is fascinated by how his body works. 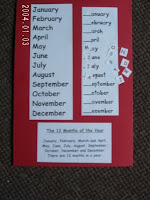 He made a lapbook to go with it. He really likes making them :0) We found one at Homeschool Share and made use of lots of the components. For the lungs, I created a mini book out of some free pages from an old Dover Publishing newsletter. It has 4 layers going a bit further into the chest each time. And to go with the lung book we did a hands-on-activity showing how the diaphragm and lung work together from here. 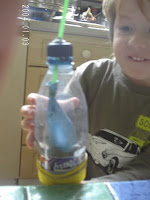 You have to scroll down a bit to find it under the heading of science. I was amazed how simple it was and really chuffed that it worked :0) Even the girl came and joined in with that bit ;0)
I also adapted the maths activity for him too. I used an idea from a months of the year lapbook and changed it a bit for the back of the lapbook. The idea is that he uses the list of the months to help him put the capital letters on the other list that has those missing. I'm going to cover it in sicky back plastic and then when he's ready for it, he can have a reusable writing activity. At the moment it's more about matching and letter recognition. I also used a rhyme from the above lapbook to help him remember the order of the months.

Other things we did was watch some highland dancing and had a go ourselves
and listen to some bagpipe music
and listen to the Burn's poem recommended in FIAR.
We also made shortbread and ate porridge and looked at Tartan.

In the meantime, Muffin's been doing maths evry day and some of her own stuff. She's got a little bit further with her Peter Pan project but she's mainly been learning how to use the sewing machine. She also FINALLY put together the lapbook of 'An Interview with my Grandfather' which was a freebie from Currclick absolutely AGES ago. It was a lovely project to do. I think my Dad thought I was a bit crazy asking him to take part in this, but in the end he really enjoyed it. He enjoyed reminiscing and I loved hearing lots of things I hadn't known before about his childhood and our family :0) She's now working on photoshopping photos to finish it off. 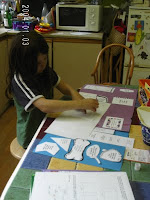 We're all still loving our bookgroup book - "Little House in the Big Woods" and she's asked to do the lapbook on it too :0) Let's see how it goes.
Posted by Belzi at 18:07