This due to a suggestion on the HSS Forum from Kendra. It made me think about what fun stuff I'm putting in our boxes this week - which is actually only 2 days worth due to out-of-the-home HE activities :)
So, in celebration of the beginning of summer and the passing of the solstice, I've got a paint-your-own suncatcher kit from the Pound shop. It's one of those things I bought last year when we were doing a sea creatures lapbook and we just never used it. I knew it'd come in useful one day ;0) 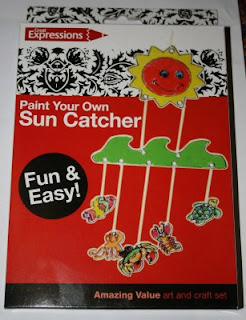 I'm also going to fill a bag up with about half a dozen objects and have the boy describe them to me and guess what they are. This is part of a yr 1 lesson from MEP maths which I have started with the boy but we onyl do 1 section of a lesson at a time because he's so young. Note to self: Order the Kindergarten book! I'll include a wooden eggcup, a sponge, a marble, a pencil, a toy animal, a wooden cube....will also have a back-up supply in case the girl wants to join in too :) It's an idea also used in Montessori schools and they call it The Mystery Bag :)

Along the same lines as that, we'll be playing a game. Paddington Magic 1,2,3. It's the same idea, a drawstring bag which contains chunky cardboard numbers. The players have to identify the numbers by touch alone and try to match them with the cards in fromt ofthem. the winner gets a key....which often sets off a whole new game on its own :) 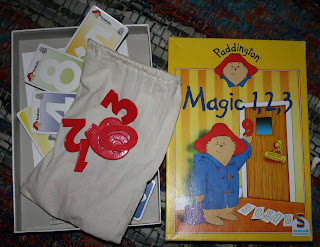 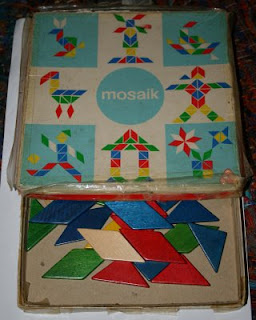 They'll also get a mosaic set. A charity shop buy. I love the feel of the wooden shapes myself. They enjoy making patterns. It surprises me how quickly they can do them. One for my girl I think. I'll put some pattern blocks and patterns to put them on in the boys boxes. There's some pattern block free printables here.
I got some off this page by clicking on Pattern Block Pictures. It says to print on cardstock and laminate but I printed on ordinary paper and put them in a see-through A4 pocket. It's easy enough to change the top one for him to do the others. I liked these because printed out one to a sheet, they fit our pattern blocks perfectly :)

Oh, and tomorrow, we'll be making fairy cakes while the boy's at Saurus. I've got an old 1950s Good housekeeping cookbook which is lovely to use. It's so interesting. Full of adverts and all about the Good Housekeeping research centre in London, how to keep a proper kitchen and be a good housewife - something I don't think I'll ever acheive lol! The recipes seem to work well, which is the main thing.

And I'll put her recorder in the last box so she can play for as long as she likes - her request :)
Posted by Belzi at 23:28