So what if it's Saturday?

I know it's Saturday but she still wanted her little packets. Boykin had asked for them too but was only interested in doing one of them which was a book of mazes. I was quite surprised because I'd put a Scooby Doo biscuit making kit at the end as an incentive to at least have a go, but no, he wasn't interested at all. Never mind.
The girl was well pleased that the first packet contained Boggle. I adapted the rules slightly so that I can play with her and just make it a bit fairer. She's allowed 2 letter words and my words must be at least 4 letters long. We didn't keep score. We can do scoring on other games. She also had a few goes by herself against the timer to see what she could come up with. No made-up words are allowed ;0)
She also did a handwriting/spelling sheet, coloured some more Peter Rabbit puppets, practised french vocab on the BYKI program I downloaded. She's learning body parts for French club on Weds. We also discovered french stuff on the BBC website but unfortunately, no body bits there :0(
She was very happy that she finished off with observational painting.
She keeps telling me off for sneaking bits of unfinished projects into her packets. Like this dinosaur joke book to make. 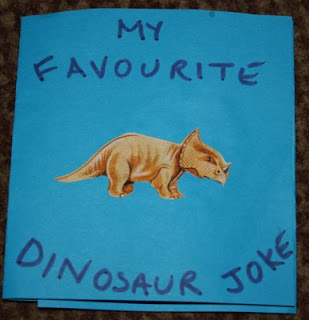 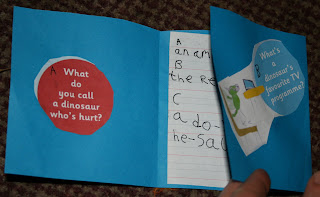 Obviously it's my writing on the front.... She wrote the answers herself inside on lined paper cut from one of those handwriting practise exercise books and she chose the dinosaur sticker to put on the front. It's just a simple minibook folded into three, with the front overlapping the back. The jokes came from scholastic magazines. They publish magazines aimed at teachers and most of what's there is for subscribers but there are lots of free stuff on the site that you can search through too.
She did her 6 packets yesterday but got a bit upset with one of the things she did, mainly cos she was hungry I think, but also partly because my little note hadn't been clear enough for her:0/ It's a learning curve all round. One of the things she did enjoy yesterday was this old mosaic set. Well, I'd better go and pack the ones for tomorrow. The workbox book says that they should have 12 each but I think we'll stick with 6. It's enough for us for now.
Posted by Belzi at 21:57