Well, today I gave the girl 6 little packets each containing an activity for her to do. She was very excited at the prospect and couldn't wait to get to them. We'd already agreed that she would do maths first and that didn't count as a 'packet'. Consequently, she got through it quickly and even when it got a little challenging for her, we both managed to stay calm and worked it throuh together. She was delighted when she realised that she did know what to do after all, it was just being presented using more mathematical language.
I love our maths curriculum and so does she......even though I still find it hard to believe that i'm actually using a curriculum. Things like that felt so alien and out of place with my eldest. But then, HEing 1 is so different to HEing 2. I still couldn't imagine using a curriculum for anything else though :0)
We use MEP maths which is based on Hungarian methods. It has been translated and adapted by Plymouth University and it's FREE!!!!! But most importantly, it's fun.
The girl worked well through her packets and even took a photo of her first one. 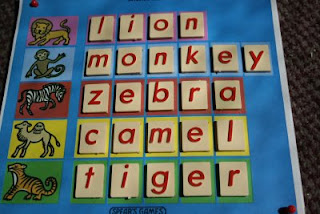 It's an old spell master set that I found in a charity shop somewhere. I loved mine when I was little and she does too. Sweet :0)
The other packets contained a handwriting book, some Peter rabbit characters to colour and construct (part of a set that we'll use to act out the story), a number puzzle, her stamp album and French vocab learning on the computer.
I'll do 6 more packets for tomorrow and keep going with this for as long as she enjoys it. It's sort of based on Sue Patrick's workbox system but I haven't read all the book yet so it's kind of half-baked. I'm sure I'll just adapt what she does anyway rather than follow it to the letter. Certainly won't be using 12 boxes per child - there's no room in my house!!!!
The wee boy brought me lots of books to read today, one or two of which had lions in them..... I think we'll make one tomorrow out of pompoms. We bought this jungle craft kit in Tescos today, it was on the reduced shelf and I thought it was pretty good for a fiver. I thought it was even better when they only charged £2.50 at the till :0)
The new windows? Well, I have now got 5 double-glazed windows in the front of my house. It was quite strange watching my old sashes being removed. I was surprise how attached I was to them. I felt like the house was having its eyes removed. Empty stone rectangular holes look so devastated. Some of the character is gone :0(
On the plus side of it all though, is that the blokes did a really nice job, very neat and they swept up after themselves too :0) And the boy got to see how old windows work and play with the sash weights and I get to build a cucumber frame to put his seedlings in :0)
Posted by Belzi at 23:27