Well, it's been a busy week so far. I'm trying to push the review stuff on one side for a bit rather than let it take over my head completely:-/
So what have we done? Monday we had visitors which was lovely. The girl made a great cake on Sunday completely by herself :0) She folowed the recipe carefully and mixed everything by hand, the old fashioned way. (Unlike her lazy mother who loves the Kenwood!) 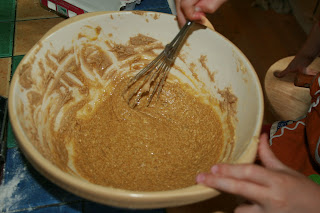 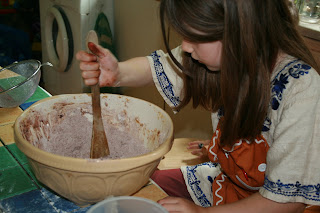 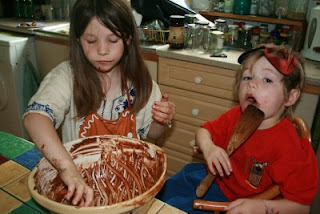 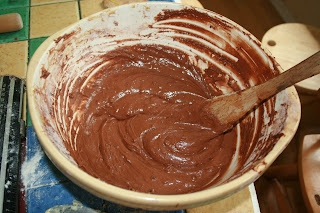 The boy made Scooby Doo biscuits - the modern way...from a packet mix ;/ 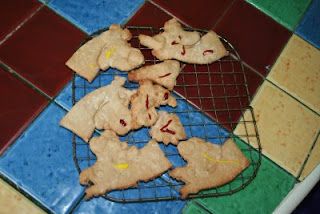 Anyway, they all played nicely together (my children and their HE friends) and the kiddywinkles got to make good use of their new bedrooms while we drank tea and chated in the kitchen. Lovely! :0)
Tuesday was storycircle where the children read out their Haikus and played a rhyming word association game. They listened to some limericks and learnt about curlihews (new to me too). This month's challenge is to write a limerick and a curlihew of their own. After that a group of them had a chess game on the giant chess set outside the library, very much a team effort.
Then they came home and we did some maths as well as a couple of workboxes each but were actually much more interested in playing out in the sunshine creating a world for all the toy animals (they have lots!!).
The girl's developed a passion for Boggle and can get some pretty big words in there. A good game for practising spelling. We also played Tot-Ten which is a maths game. Surprisingly enough, at bedtime the decided they wanted to finish their boxes off! I had to say no cos it was just too late. They'd been watching the BBC series of 'The Borrowers' on DVD that I found in the library. We read the book a while ago, and this is much more like the book than the film - I don't recommend the film but the series is ok :0) They also practised French and the boy had a days of the week game in his boxes.
This morning it was another early start as we went to French club. It's amazing how shy my boisterous girl can get sometimes. Days of the week came up - which we'd gone over the day before (in English, French and Portuguese) so it was good to reinforce them. We got given a CD of French learning songs we listened to in the car - both children joining in and enjoying it. Then this afternoon, we looked after my friends 4 month old baby and did workboxes. The girl complains at me if they're not ready for her! So we did some reading, drawing a T-Rex, Enjoyable English workbook (pronounced 'Easy'), and some knitting. Then it was off to Drama and the boy went to tea with his cousin and my mum. The baby went home and I had a whole hour to myself.....bliss! ;0)
Then on to swimming, early night and the end of George's Secret Key. Phew!
Now I'm going to pour myself a gin and tonic (should I admit to that? Or is that alcohol abuse?) and organise tomorrow's boxes.
Posted by Belzi at 22:35