Today Boykin discovered he can read :0) He's actually been reading for a while now, bits of books, odd words, a page here and there, whole books for the library reading scheme and whole books in his Scooby Doo learning-to-read books. (He's read 5 and a half out of 12 so far). But today, all cosied up in his 'den' in his bedroom, he picked up a book and read it all by himself and to himself. 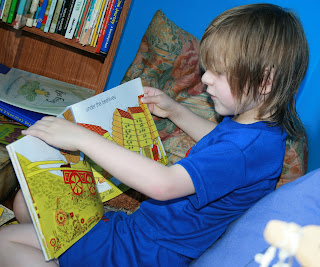 No-one pointed at the words and there was no white strip of card held under the text to help him remember which word he was reading.
He was so chuffed and we were chuffed for him. 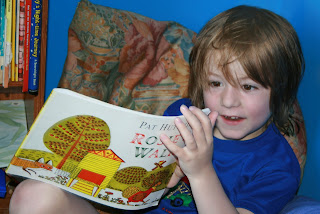 Reading is something I take for granted. I don't ever remember a time when I couldn't read and so I've always viewed reading as something that you learn to do rather than something that you are taught to do. Maybe it's because of this that I've never followed a reading scheme with either of my littlies. Instead, I have read lots to them, made alphabet books, sewn letters into cardboard, used lots of magnetic letters, felt letters, sandpaper letters, sticker letters, playdoh letters, alphabetti spaghetti letters...... (you get the idea) to help with phonics. I've read out words on signs, words in picture books (onomatopoeic words were their faves), words on the computer screen, film titles, food packaging, instructions in workbooks, etc. We've drawn pictures to help with letters that were difficult to grasp - huge chalk pavement pictures- and told little stories of how letters join together to make new sounds and them acted them out. We've watched Letterland and Jolly Phonics videos and DVDs and I've stood in crowded places making silly gestures with my hands and arms to help them remember the sound of the letters they're looking at.
And today, it's all been worth it when my youngest and last child announced "I can read!!" And just to make sure, he read the book all over again to his sister :0) 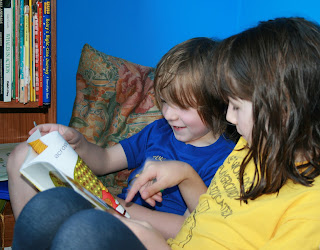 Things that have helped us on our learning to read journey

Email ThisBlogThis!Share to TwitterShare to FacebookShare to Pinterest
Labels: reading