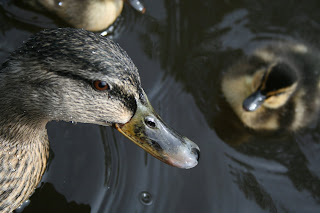 We did the FIAR stuff for Make Way for Ducklings over the last couple of weeks. It seemed fitting for the time of year (there are ducklings in our village) and I was especially chuffed when we went to Peasholm Park in Scarborough and discovered they have their own version of swan boats :0) 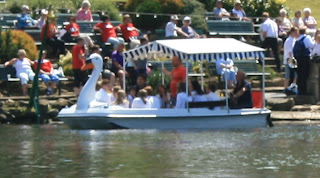 It's a very lovely story about Mr and Mrs Mallard looking for the safest place to lay their eggs. When the ducklings arrive, Mrs Mallard leads them through the streets of Boston to set up home in the Public Gardens. These places really exist, as do the swan boats featured in the story.
This meant that we could do some map work with real maps, and look up the Gardens and the duckling sculpture online.
We actually tried rowing this book a couple of years ago albeit unsuccessfully. Boykin was a bit young and The Girl just wasn't keen.
As well as their lapbooks, they had a lovely time making ducklings 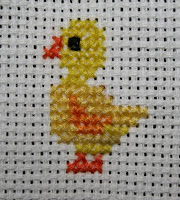 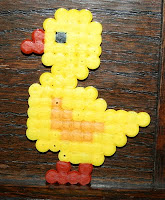 The cross-stitch pattern doubled for the hama beads too.

We made the lapbooks by putting 2 folders together to make a 4 page book. These tend to be easier to look at afterwards as you need less space to open them out. See video (not ours)

He drew the duck himself and chose his own fonts for the title - capitals are 'Dalek' font ;0)

No idea where the dot-to-dot came from. I suspect it was once given as a freebie in a Dover newsletter. Most of the printables can be found on Homeschoolshare. If I can remember where the rest come from, I'll link to them :0)

The USA world book has a US flag mini inside it.
And the Massachussets mini book is a composite of a free unit from School Express and a where is Massachussets notebooking page (not shown because it's inside) from HSS. 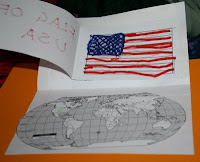 The dot-to-dot is to practice alphabetical order just as the ducklings names appear alphabetically. (Another Dover freebie?)
He did a rhyming words worksheet and we played 'Rhyme Out' and made up silly rhymes to go along with the FIAR leson. 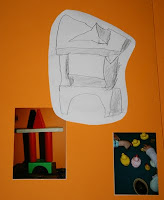 This is his drawing of the tower he built which goes with one of the art lessons in the FIAR manual. An exercise in drawing what you see. 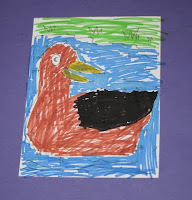 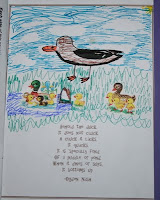 She mostly used the same printables as her brother but did different things with them. She also had one or two extras :0) Again, most are from HSS.

She made more use of the free School Express Massachusetts unit.

The dot-to-dot here came from Waterford Press. You have to register - it's free - and then you get access to lotsof different animal related educational printables.

This is the last section of her lapbook with photos and a google map of Boston as well as her drawing activity.

Another lesson they enjoyed was the maths. The manual suggests using cutout ducks but we found all the rubber ducks in our house and used raisins to do multiplication :0)

They've enjoyed this book and the work they've done to go with it. We even tried feeding our local ducks peanuts but they were having none of it. They only like bread :0)