Today was our local Home Ed themed group meeting - Historical Food aka Food through the Ages. Food based themes are great to do with a mixed age group of children. There's something for everyone and always something new to taste and learn.
The time periods covered were Ancient Egyptians, Romans, Anglo-Saxons, Stuarts, British Empire, Victorians and World War II. Most of the cooking activities were sweet, except for WWII when sugar was rationed so instead of icecreams they had carrots on a stick which instantly transformed into swords for three musketeers :0D 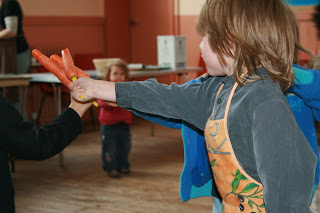 The Girl enjoyed making rose water creams and tasting lots of Victorian sweets and puddings while Boykin had a go at making the oldest known sweet recipe - Tiger Nut sweets from Ancient Egypt. A sticky combination of dates, cinnamon, honey and sesame seed (I think). The mum who took that activity emailed the recipe through and The Boy ordered asked me to print it out  immediately. He loved them so much :0) 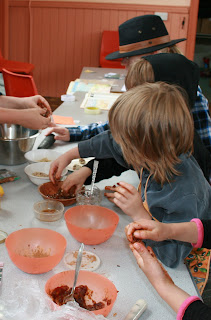 They made some 17th century knot biscuits and tried some chutneys etc that came from the times of the Raj along with tonic water to stave off malaria. Roman food was more biscuits and cucumber soaked in honey - very nice according to The Girl.
I took some barley stew and ryebread. I felt like I was cheating a bit because, rather than doing something new with my kids, I used the Anglo-Saxon recipes we tried a couple of years ago. However, it was popular with The Girl then and it still is now :0)
We set up a book corner to go with our theme and The Girl very much enjoyed reading some of them to other children. 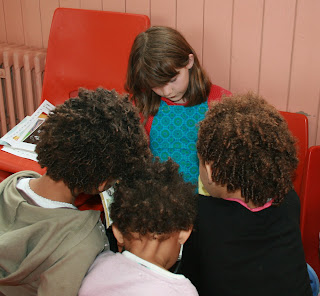 A timeline was made, and interestingly, we learnt that the first Indian restaurant in Britain opened in 1809 while the first fish and chips went on sale in 1858. 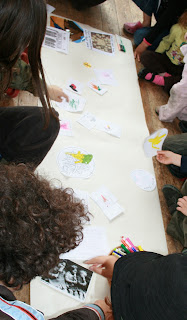 This is a really great site for cooking historical food with kids :0)
Posted by Belzi at 22:34

Email ThisBlogThis!Share to TwitterShare to FacebookShare to Pinterest
Labels: HE groups, history, recipes