Well, if you're doing a project on cinema, it's importanty to go to a cinema :0)
Luckily for us, a friend of mine had organised a trip to The Vue Cinema in Bury. We were shown around the projection room and then got to see Zookeeper. The cinema is just about to convert to digital projection, so we were very lucky to see the old projectors and the new digital ones. 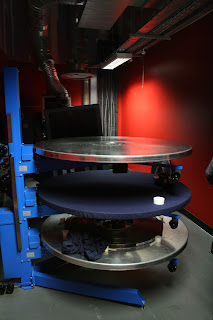 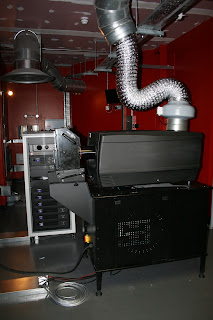 These are the reels the films are held on.

This is the new digital projector complete with special filters for showing 3D films. 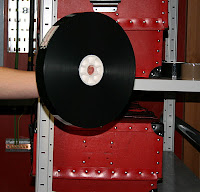 This reel holds about 20 minutes worth of film which has to be spliced together by hand to all the other reels to make up the full picture. The last Harry Potter had 7 reels and the Lord of the Rings films had 10 apparently. 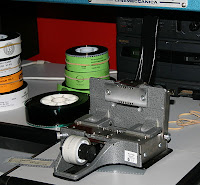 Here's the splicer used to tape the ends of reels together which also punches holes in it so that the taped bits can run through the machinery. When you're watching a film, look closely for a slight mark where the connection is. Old films used to have a little black dot in the corner of the frame to tell the projectionist when to change the reels. 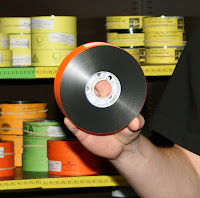 This is a short reel for a trailer from a cupboard full of trailers. 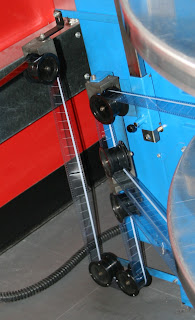 Finally, we got to see our film all set up ready to be shown :0)

It was a really interesting tour but I was sad to learn that this 10 screen cinema, instead of having 5 projectionists as it has now, will only have 2 when the switch to digital is made :0( Somehow, I prefer the shiny wheels and whirring film to the impersonal black box and 5 people in work has got to be better than 2....

The film was good though :0) Both my children thoroughly enjoyed it and there were plenty of laugh out loud moments for us all. The message was pretty good - just be yourself and money isn't everything. we discussed the characters and their plausibility in the car on the way home. There's some interesting stuff on animal behaviour and the special effects were pretty good. Those animals look so natural when they're talking :0)

We received a free CD-Rom from Film Education at the beginning of the summer which we had brief look at then but will get out and look at again tomorrow - all being well ;0) I filled the form in stating I am a Home Educator and regularly receive free material from them. They've always been very good at providing free resources - even way back before we had internet when my eldest was a teenager and everything was hard copy and on VHS. Definitely worth taking a look at if you're family are into films :0)
Posted by Belzi at 23:53