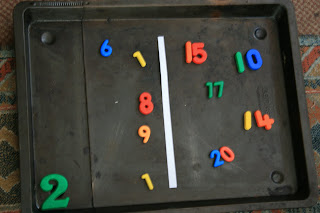 While The Girl had a bit of a meltdown over her maths :0( She's fine with the straight forward arithmetic but sometimes it takes a couple of attempts to get to grips with the way new problems are worded. After a quick cuddle and some daftness on my part, she managed to solve it. Phew! I keep thinking I can just leave her to get on with it herself but these little outbursts are a not-so gentle reminder that I still need to keep a good eye on the lesson plans to get the best out of this cuuriculum.
I read a good few chapters of our book group book while she spent the rest of the morning making some beautiful peg dolls and Boykin completed his 100 piece Invisibles jigsaw for the first time. Smiles all round :0) 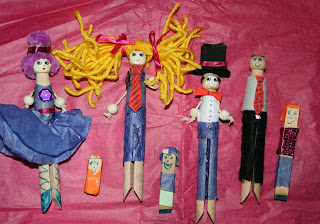 In the afternoon we went to book group. We're reading Journey to the Centre of the Earth by Jules Verne, or rather, we were supposed to have read it for this book group session. However, only one family had finished it (not us - see above) and all the families decided that there were just too many learning opportunities to miss here, so we are carrying it over to next month to give ourselves more time with it. My children are enjoying it even though the vocabulary is quite challenging. Boykin made a picture based on the book cover to take in and we managed to play the comprehension snakes and ladders game as usual. 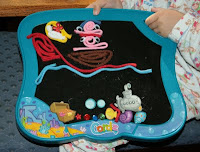 Wednesday - We went to our local HE monthly themed meeting where we met up with 5 other families - a bit quieter than usual. This month's theme was Europe. Activities included a cheese tasting quiz, a borders quiz, a game to identify the country of origin of Euros by their designs and the opportunity to design your own British Euro. 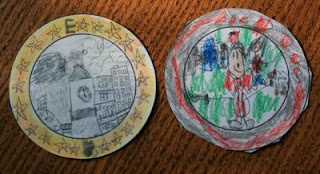 The Girl designed the one on the left which represents rural and city landscapes separated by Big Ben. Boykin's is a Doctor Who design, complete with Tardis, sonic screwdriver, Amy and Rory.
Another activity involved them being given a minibook with a map of Europe inside and a country. At the start of the day they had to stand in the room according to where they thought their country was situated in Europe. They then had to go and put the flag of their country on the front of the minibook and add some facts to bring back to everyone at the end of the day and stand where their country is actually situated in relation to all the other countries/children.

Email ThisBlogThis!Share to TwitterShare to FacebookShare to Pinterest
Labels: HE groups, MEP maths