Well, we've had a busy week again. We're reading Owl Moon for FIAR, and we've read chapter 4 of Boxcar Children for BYFIAR. We've also done a few of this months activities from Teacher Book Bag as well as the usual MEP maths and various bits and bobs that they fancy. In and amongst all this we've been swimming with HE friends, been to HE gym and the start of the Not Back to School Picnic - we had to leave before the main event for the girls regular pre-Brownies tea date. She's also been to drama, both children have been to choir, they'v had friends come round to play (HE and nonHE) and most impoprtantly - ta-ra-ta-rah - she got her grade 2 swimming badge :0) She's over the moon and I nearly cried for her. She's been in that same class for so long I was beginning to think we'd have to give it up :0/ I'm so chuffed for her.
Workboxes seem to have been a bit of a struggle this week. Everything's taken such a long time to get through and yesterday was the only day they actually got to the bottom of both their piles!
DDs completed boxes have been The Little House in the Big Woods lapbook - this is getting easier for her as she now has the incentive of having the other books read to her as I just found them all in our local charity shop for 10p each!! She finished her paper house and her collage as well as making a map of the boxcar and its surrounds. The Teacher Book bag for September had some mapping/graph co-ordinates exercises in so that tied in nicely :0) She's written a song for a competition in NGKids and I've signed her up for Livemocha to practice french. Its not strictly speaking a childrens language course (you're supposed to be 13 to sign up for it) but she's enjoying it and does it happily , going over the time I give her :0) We started doing the first aid lesson, which involved playing at doctors, vets and discussing how hard she'd have to study if she really wants to be one.... Oh, and she also did a couple of pages in her spelling book.

Panda has been enjoying Owl Moon. We've talked a lot about self-control and rules and why we have them...not that it seems to be having any impact on anyones behaviour unfortunately :0(
He tried very hard at the art lesson and managed to draw a lovely tree based on the one in the picture :0) 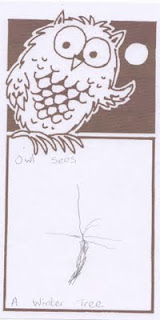 We've discussed and made a minibook for similes and have all played at making up our own.
We played this owl-related maths game today, making fantasy owls :0) It went down better than the FIAR units of time lesson :0/ Although he did manage to sulk for 60 seconds!!!! 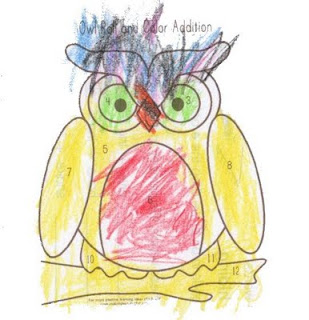 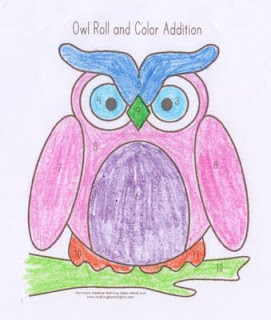 For French we've repeated the colours game with his cars. He also did a couple of the Teacher Book Bag co-ordinates and simple map reading activities. He also had the Dora DVD from the library in 1 of his boxes for a treat :0)
We've also read other Owl books and listened to 'The Owl who was Afraid of the Dark' in the car :0) More to come....
Posted by Belzi at 22:45