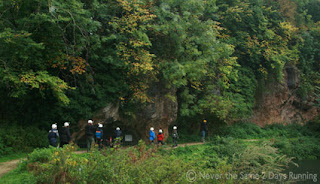 
The staff at Creswell Crags were really helpful and accommodating, changing our activities to better fit in with the weather. They were knowledgeable and enthusiastic, even though they were getting as wet as we were. They were great with the kids and easily coped with the mixed age range of our group (3-13ish). Although they were getting VERY wet, none of the kids complained and they all seemed to enjoy themselves - as did the parents who were also roped into the survival activities.

The Girl says: It was very good but I didn't like the cave spiders. I liked the shelter building and hunting the mammoth. I'd recommend it and my favourite cave picture was the one of the Ibis bird.

The Boy says: It was very good but they were actually quite mean because they took down our shelters when we'd finished them and I wanted to sleep in mine. It was VERY wet.

I say: 'No chance' to the Boy sleeping in that shelter. It was very exciting to hold real Ice Age artefacts - antler is surprisingly heavy and stone-like. I learnt that there were cave lions in Britain and that there are cave spiders now. I'd definitely recommend Creswell Crags to other Home Ed groups as a place to visit. I'm looking forward to going again - probably next summer....on a sunny day ;)

The trip was a follow-up to our local Home Ed group's themed meeting where the children learnt about cave painting, made clat beads, knapped some flint and played Settlers ofthe Stone Age whilst the mums made a model of Stonehenge :)

As a family, we learnt a bit about the Stone Age when we did Chapter 1 of The Story of the World Vol 1. Here are some links I found then which maybe useful to anyone learning about Prehistoric man.