So, in preparation for this months local group meeting, we finally got round to doing some experiments fromthe book above. It's an American book so I had to change some of the text but nothing major. Most of the experiments can be done with stuff you'll have at home - lots of food. I think one or two of the chemicals may be a little harder to get here - borax and iodine spring to mind - but I'm looking forward to working our way through the book.
The first experiment we did was electrolysis using pencil leads (carbon), water, 2 wires and a battery.  The pencil leads are in the crocodile clips hanging in the water. 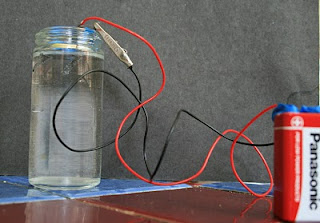 It worked! Bubbles formed. Apparently, one pencil lead has hydrogen bubbles on it and the other has oxygen bubbles:) 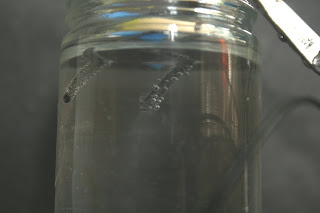 We did some sodium experiments with salt, freezing salt water and plain water and we have two dishes of salt solution growing crystals. Anyway, the boy enjoyed making bubbles so much he asked to do the bicarb-vinegar experiment again which seemed to tie in nicely...

... and resulted in The Magic Vinegar Pot!

After cleaning up that little lot, we went to a birthday BBQ and then to the theatre to see Funny Bones.  I highly recommend it for anyone with children. It's funny and interactive and you get wet :)

On Sunday, we had more science. This time they dug out a crystal growing kit and set those going. There's only a couple of different types of chemical in the kit, mostly with added food colouring but it was interesting to show them the chemical formula names and then refer back to the Periodic Table to see what they were. 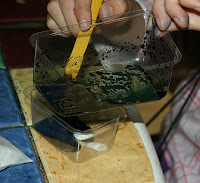 Email ThisBlogThis!Share to TwitterShare to FacebookShare to Pinterest
Labels: Beyond FIAR, science