Well, it's been a lovely weekend :) A couple of their friends came for a sleepover which added to the fun. Last night we played cinemas, complete with posters, tickets, usher, ticket collector, popcorn and projectionist (me with the remote lol). They watched Planet 51 and covered the floor with popcorn for that extra touch of realism ;) 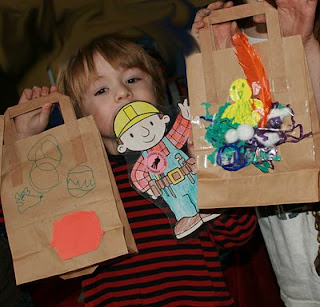 They all woke up far too early very eggcited ;0D
They made their bags for egghunt no. 1 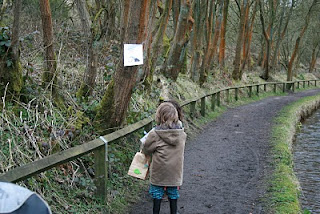 And then, with some more friends, we went on egghunt no. 2 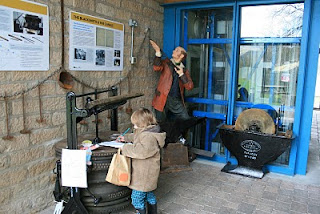 Closely followed by egghunt no. 3 :) 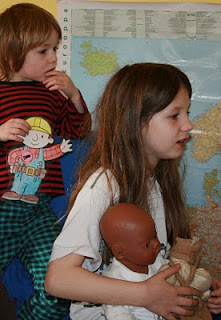 Then we watched yesterday's Dr Who on iplayer.
I earned good Mummy points by making a bow-tie for the Boy who refused to having his picture taken without his sonic screwdriver which unfortunately he couldn't find :( It's the first thing I've sewn in ages that's not been just mending. I'm well chuffed :) 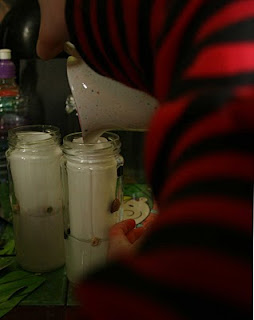 He did let me take photos of his seed planting though. He's put some beans in a jar with blotting paper.... 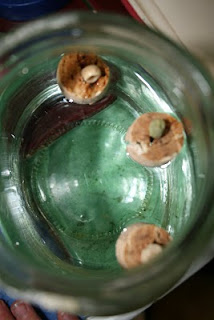 ...and he put some peas on corks. I'm not sure how this will go. It's an idea I got out of an old Enid Blyton book so I thought we'd see how it goes.
Soak some pea seeds overnight.
Get a jar and half fill with water.
Slice a cork - our slices were about 1/2" deep.
Put a hole through the centre - my corkscrew had already done that bit :)
Place pea seed on the hole and float on the water.
The roots should go through  the hole and into the water.


All the while, The Girl was running ahead with her friends, playing Star Wars micro machines, Dr Who, Hide and Seek,etc as well as playing Hot Cross Buns on the piano whilst eating large amounts of chocolate :0)
All in all, we've had a a great time :0)
Posted by Belzi at 00:21