On Monday, we had a great day out at Fountains Abbey taking part in a workshop run by a theatre company who visit there regularly. We were very lucky to be offered this opportunity when they had a free day with no school groups.
There were about a dozen or so families from all over Yorkshire with an age range from under one to over sixty.
I can't rate this day highly enough. The three actors got everyone involved. They were very knowledgeable and presented the material in a very thought provoking way.
They set the scene by directing us into a 'chapel' where St Benedict read out his rules in semi-darkness filled with the smell of incense. After a short discussion about the austere lives they led (only one blanket, one meal a day, no laughing, no unnecessary chatter and prayers every few hours, even in the night), we played a game in the courtyard which involved lots of running around and general silliness.
Then we all put on monk's habits and prepared to leave on our journey to found a new Abbey so that we could stick to the monking laws as layed down by St. Benedict.

Along the way, we met a woodsman who took us to a place where we could found a new abbey. Some of the novice monks (children) convinced the woodsman to join us, but he had to give up a precious ring as monks weren't allowed any personal possessions. The ring kept reappearing throughout the day and was used as an indicator as to how well the monk's were at keeping the rules.
The actors really brought it all to life. I found it quite amazing to think that the Abbey was originally founded by just thirteen monks and that the stone was hewn by hand from the nearby cliff.
We were given a tour of the ruins by the actors who moved the story forward 200 years with short dramas. The children were encouraged to spot the changes taking place, ask questions and participate in the roleplay. The Boy got so into character that he hardly spoke a word all morning, trying his best to keep the monk's rules :0) No mean feat for that child, I can tell you. 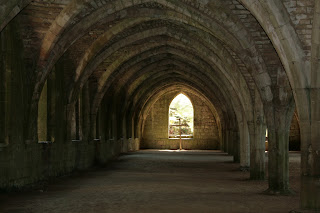 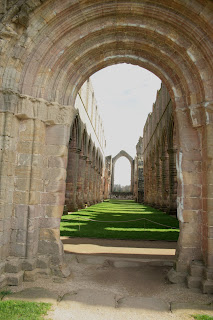 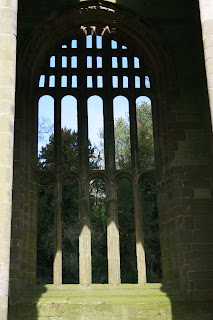 Eventually, we were divided into 2 groups, choir monks and lay brothers. The lay brothers sheared sheep and did farm work while the choir monks learnt a short Latin chant which we sang in the church ruin :0)
Finally, we were allowed to go for our lunch and return to the 21st Century. We were feeling pretty peckish by this time. The actors had deliberately set a late lunchtime to give us an insight into how the monks must have felt on their one meal a day.
After lunch, we moved forward another 200 years and came face to face with Henry VIII. We explored the dilemma's faced by the Lords and monks of the day and thought what it really meant to them to switch from the Pope to the King as head of the church. We also learnt just how far the monks had strayed from St Benedict's rules and how corrupt they had become. Monk life seemed much more attractive in this period ;0)
All in all, it was a very interesting day and my 2 really enjoyed it. I was so impressed by the way all the children took part (their acting skills and enthusiasm was brilliant) and by how well the actors kept everyone engaged. It was a new challenge for them too, as they're used to leading school groups that not only have a narrow age range but where everyone knows each other already and is used to working together..
I'm so very glad we went to this and I'd love to take part in more workshops run by these people. I also want to go back to Fountains Abbey and see what else is there. Well worth a visit :0) 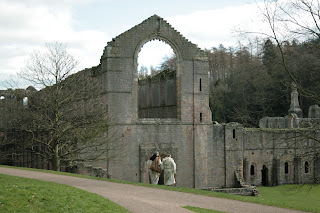 We also read Brother William's Year as a follow-up. It's set in Westminster Abbey but my children recognised and remembered much of what they'd learnt at Fountains.