Hmmm! We do other things besides going on trips.... honest ;0)
Today we went to the Royal Armouries Museum in Leeds, which kind of tied in with our trip to Fountains Abbey what with it being a Tudor workshop. That's about the only connection because it was about Tudor weapons and the Field of the Cloth of Gold. We watched a short film and had a short talk and then a short play with helmets, armour and weapons, old and new. 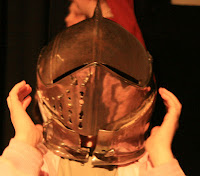 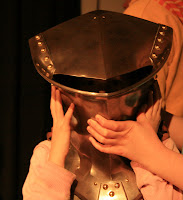 We also did a workshop where we embossed designs on thin copper sheet, good fun, but I suspect very much easier than embossing real armour... 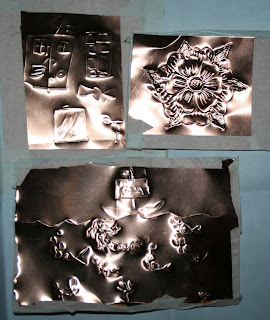 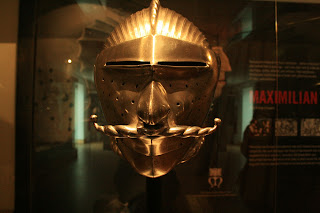 He was intrigued by the idea of moustache armour :0)
Other things they liked were the shop and the interactive exhibits.
We didn't get to see all of the museum, mainly concentrating on the tournaments gallery as it connected with the workshop. We saw Henry VIII's armour and also, armour that was made for little boys.
In the other galleries, we saw some very strange looking guns going way back. I hadn't realised they'd had guns as early as the 15th century. They don't look like they'd have been very accurate, but I bet they were very scary! I'm not keen on guns, but have no qualms about bows and arrows or swords for some reason, although I wouldn't want to be in a battle with any of them. 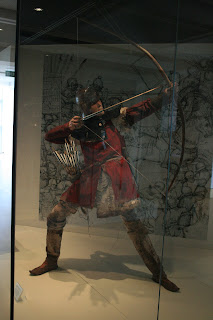 We even found an archer from the Wars of the Roses, which we had been reading about in last months bookgroup book -

Email ThisBlogThis!Share to TwitterShare to FacebookShare to Pinterest
Labels: HE groups, history, museums, the duchess bakes a cake, workshops