It's only Thursday and we've been so busy I can't remember what we did on Monday! Ah well, it might come to me by the time I've written the rest of it :0)
Tuesday we had book group in the afternoon. Over Christmas we all read different books that were somehow related to the season. The Girl chose the MacMillan Book of Christmas which contains a mixture of short stories, poems and carols. We didn't read all of it, but then it's not that kind of book. It's more a book that you could get out year after year. They both enjoyed the Naughtiest Little Sister story the most and I have a feeling that they may want to borrow this book from the library again next year :0)
We did do other things that day, like maths and cooking and playing with friends but we failed to go swimming (New Year's resolution broken already).
On Wednesday we went to our local monthly themed meeting where we did lots of ativities related to China. It was a very busy session with some new families and that New Year feeling of renewed energy and enthusiasm :0)
Activities included


They could also learn about Pandas and make a minibook, colour in maps of China, write a part of a cartoon strip of a Chinese story, learn about the I-Ching, make paper lanterns and play that extremely famous chinese playground game Grandmother's footsteps ;0D 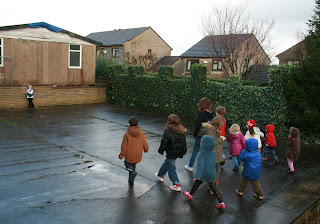 They had a lovely day and I think the Boy's shirt will never come clean. White shirt+muddy grass+ lots of boys=Daz challenge failure :0)
They both managed to go to their swimming lessons on time where The Girl stayed completely dry. She's doing lifeguarding now and they were doing CPR stuff.
Thursday, I wrote lists of everything they needed to do and everything I needed to do. I'm finding that list-making makes life less stressful and gives me headspace to engage more with what I'm doing rather than spending all my brain power on trying not to forget to do stuff that I haven't done yet. It helped. We got lots done even though we changed the list halfway through the day and went to visit friends instead of doing history (their list) and vaccing up (my list).
And Monday, The Girl had a cornet lesson and the Boy went to Beavers. She was pleased to bring home her Grade 2 Cornet certificate even though she insists she's never doing a music exam again. The Boy was equally pleased to bring home another badge for me to sew on :0)