The Duchess Bakes a Cake by Virginia Kahl

We really enjoyed this story. It's about a Duchess who puts too much yeast in a cake and ends up stuck on top of it as it grows higher and higher. The rest of the story revolves around solving the problem of how to get her down. Straight away, both kiddywinkles predicted the solution but this didn't detract from the pleasure of reading the story which is written in rhyming couplets.

There are quite a lot of lessons suggested in the Five in a Row manual and, as I decided to do this row mainly as a discussion based project, we did most of them. I also added some ideas of my own from the resources we already have.
This was a great opportunity to introduce some history of castles and life in the Middle Ages as suggested. Obviously, we focused on Britain, even though the characters names sound more Germanic. This became an ongoing theme as we read the book, learning a little more each day.
For the Language Arts lessons, we revisited alliteration, explored rhyme schemes and synonyms and discussed the plot line of stories. This was perfect timing as the children have been learning about the ingredients you need tp write stories in their creative writing group. I love killing two birds with one stone :0)
For Art, we looked for clues in the pictures and talked about complementary colours. The Girl drew her own illustrations... 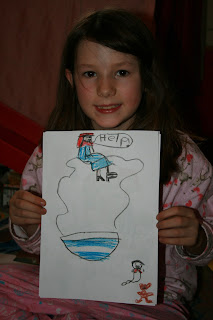 ...and The Boy built a cardboard castle from a kit (with a little help because of the fiddly bits). 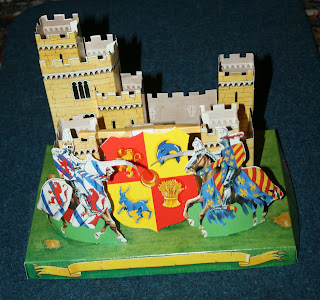 They both also got sticker books for Christmas which came in very useful :0)
We did baking for both the Maths and Science activities. For Maths, we weighed and measured dry and liquid ingredients... 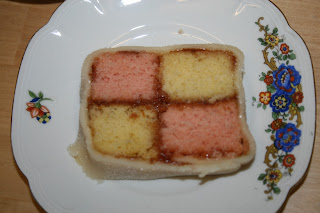 We also reread Sir Cumference and the Knights of the First Round Table and did some activities to go with it. I'd really like some more books in this series. 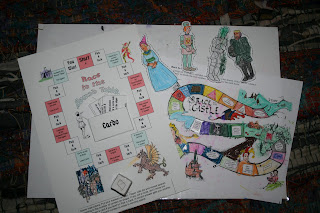 I didn't fancy the Science activity suggested in the manual and The Boy wanted to play with yeast again, so I found a recipe for a yeast cake.
We made one portion of dough using the correct proportions and another using 10 times as much yeast. Reminder to self - don't start dough rising just before you have to go out, unless you want a yeasty pancake!
When I went out, the dough with the most yeast in was twice the size of the other pieces but I didn't have time to bake them. By the time I got back to put them in the oven, they had deflated. We baked them but they didn't rerise (is that a word?)
Taste test - too much yeast = YUCK!!!
We were very glad that we didn't have to eat the Duchess's cake.
Disclaimer: if you try yeast experiments at home, don't blame me if you're house smells like a brewery for a week afterwards :0)
The highlight of the week, though, had to be the splendid bargain that The Boy got from our local charity shop for £3.
Sir Cumference printables
Discussion guide with puppets and game
Activities on Homeschoolshare including game and circles worksheet
Books we used
The Children's Book of Domesday England