A New Coat for Anna

We recently rowed 'A New Coat for Anna' by Harriet Ziefert. It's set in some unidentified European country shortly after the end of the Second World War and shows the process of the making of a woollen coat from sheep to wearer. It includes topics such as bartering, the seasons and Christmas. We had a lot of fun with it, both children enjoyed the story and both did some of the craft activities and Boykin made a lapbook using some pieces from Homeschoolshare :)

This is my favourite bit in his lapbook. He designed the page and decided where to put it - I just measured him so he could add his dimensions. Look at the knees and shoulders - lovely little details :)

We made a pattern of Monstrerat from his French book and he sewed it together to make his finger puppet. This is a job that he's been wanting to do for a while but we've never got round to it. Monstrerat and French have nothing to do with the story but it seemed the ideal opportunity to kill two birds with one stone when the FIAR manual discussed patterns and patternmaking :) 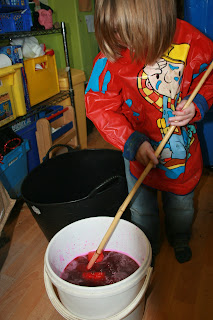 Then we did some tie-dyeing - another adaptation of the FIAR manual lesson. I'd bought 4 packets of brand new orange napkins in a local charity shop just before Christmas which were perfect for this. Luckily, we'd already had some practice at this :) Yes, those are my children in those photos. Thanks to my lovely friend at Cheerymishmash :)

Luckily, there's been lots of textile type stuff happening in our local HE group this last month which has given plenty of opportunity to relate the story to real life. We live in what was a textile town so there are plenty of resources available. That's one of the reasons I was so glad to do this story with him :)