After keeping an almost daily blog for a month, it seems like such a long time since I've posted ;)

So, what have we been doing in the last 6 days?
We ignored April Fool's day by accident and  went to a local Home Ed craft group where Boykin tried his hand at reverse glass painting. He was very pleased with his efforts. It's quite tricky in that you have to paint first the parts of the design that you would usually paint last. I remember that we did something similar with a chocolate kit that we had once....

On Saturday, The Girl started her Duke of Edinburgh volunteering activities at the local library. I'm really impressed with how well organised they are. She came home with forms to sign, information about what is expected of her and how they go about supporting D of E volunteers at all levels. She has a lovely mentor in one of our local librarians and I'm sure she will get a lot out of it :)

We had a couple of easy going days spent mostly at home. It involved some maths, some movies and some music. Oh, and lots of Agatha Christie.

Tuesday was book group day. Hence the abundance of Agatha Christie in the previous few days. I really recommend The Double Clue

. It's a collection of four short stories featuring Hercule Poirot. We none of us guessed whodunnit. We took the Cluedo Board Game

to book group to play, in keeping with the theme. I'm glad we did too because the local library was pretty noisy with a craft workshop going on. I'd forgotten that things like that happen in there during school holidays. At one time we'd have been there joining in, but they're both a bit big now really :/

After book group, Boykin went to his friend's house for a birthday sleepover. The Girl treated me to a splendid evening of games, chocolate and a film and I treated her to Chinese takeaway. We played Ticket to Ride Europe

. We decided to watch Slumdog Millionaire while Boykin was away

because he is too young for it. I think I'm too young for a lot of it too. It's a good film but I found parts of it are very distressing :( You can read about it on IMDb

Today, there was more music practice, more maths and lots of shelf building and I cooked dinner for a change :)


Oh, and do you remember that Boykin was observing seeds germinating? Well, one of them survived and produced a leaf as well as a root. He planted it in a plant pot yesterday and today it had nicely perked up. The Radish :) 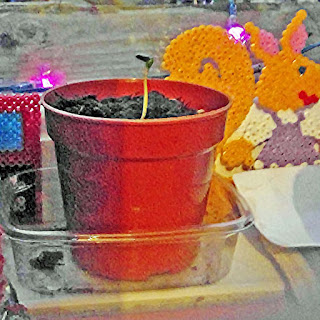 Email ThisBlogThis!Share to TwitterShare to FacebookShare to Pinterest
Labels: general HE, maths, seeds