Review & Competition - An Eagle in the Snow

We love Michael Murpurgo books here and I was delighted to be asked to review his new book and run a competition for you, my lovely blog readers :) 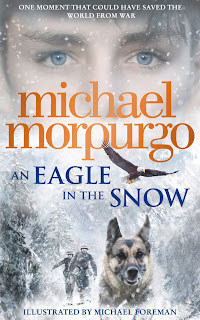 As you all know, I'm a great believer in reading aloud to children, no matter what their age, so it was a pleasure to read  An Eagle in the Snow

to both Boykin (10) and The Girl (14). It's fab to have a book that spans the age gap and engages them both equally. Much crafting and building took place over the two afternoons it took to read the book; creative activities always seems to help them focus better on a story :)

Morpurgo makes this an easy book to read aloud, being written mainly as a conversation between three of the characters. For once, I managed to consistently remember the voices I gave to each of them, although my German accent definitely needs some work :/

The layout of the book made it a much quicker read than I thought it was going to be when I first saw it. There are wide spaces between the lines of text, and it is beautifully illustrated by the poignant artwork of Michael Foreman.  Even though they're black and white, the illustrations reminded us of a another Morpurgo/Foreman collaboration that we explored last year, The Best Christmas Present in the World

. That book is also about World War I and the similarity of some of the pictures helped  Boykin make connections and remember that we were reading about the same war, even though An Eagle in the Snow

As always with Michael Morpurgo, there are points in the story where I have to catch my breath and shed a few tears. Being written in the first person, a stronger connection is created between the reader and the characters leading to deeper empathy. As I read, I realised that some of the subject matter of this book is just as relevant today as it has always been, what with the ongoing wars in the Middle East and the current refugee crisis.

Both my children (and I) very much enjoyed the book. They liked the characters and particularly enjoyed the twist at the end. They thought it was a sad story and wouldn't recommend it for young children. Boykin was excited that the protagonist is 10 just like himself and that we have also been to Bridlington. They both thought Billy Byron had been a brave man, despite the character's own opinions on the matter. The tension of the story is balanced by touches of humour that make the characters believable and very human. I like how Michael Morpurgo has the knack of creating heroic military characters without ever glorifying war.

Our conversations during and after reading covered World War I, World War II and the similarities with the modern day refugee crisis. We also discussed courage and  doing what's right, as well as exploring a whole host of "what ifs".
To follow up, we found Coventry on the map, looked at photographs of the Cathedral, read about the Blitz and learnt about Dig for Victory. Personally, I really appreciate the Afterword where Morpurgo gives the true account of the most decorated Private of World War I. I like to know which parts of the story are pure fiction and which parts are based on truth. This book would be good as part of a larger project on both World Wars, or could even be used as the basis for a literature-based unit study of its own.

This was the perfect book to read over the weekend of Remembrance Day, looking at both the World Wars as it does and making connections between the two. In our research, we discovered that Coventry had been bombed on 14th  November 1940. The upcoming 75th anniversary of this event makes it another timely read.

Disclosure: I received a free copy of the book to review. No money has changed hands. The opinions expressed are my own and my children's.

To win a copy of this book straight from the publisher, please enter the competition via the rafflecopter widget. Make sure you leave a comment below this post to validate your entry. Competition open to UK residents only. Book is aimed at ages 9+.

a Rafflecopter giveaway
Posted by Belzi at 04:00