Bingo is a great game used in all kind of learning. We've used it for learning foreign languages; shape and number identification; letter recognition; matching words and pictures as an early reading game; we've even got an Animal Soundtracks

My children often want to play maths related games instead of doing their workbooks - especially for what they call Friday fun maths. They can be quite inventive sometimes :)

The Girl came up with a great way to play Bingo. We have a basic set with a pretty large selection of cards. We played a few times coming up with several variations.

The basic premise is to cover the numbers on your bingo board. The caller draws numbers from a bag and the other players cover that number if it's on their Bingo card. The caller also covers the number on his Caller Board to keep track of what has been called and to check when someone shouts Bingo!

The Girl put only the numbers 1 - 12 into the pot to be drawn. She then pulled out 2 numbers which we had to multiply together. The product was then the 'called' number. As we continued playing, we extended our equations to include addition, subtraction and division so that we could get all the numbers on the caller's board. It worked pretty well :) 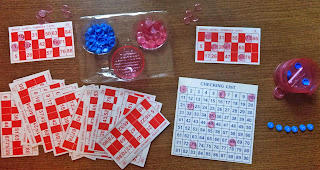 You can buy a print-and-play version of The Girl's game with full instructions for variations and extension activities here.