... went to see Horrible Histories Terrible Tudors at The Lowry. Apparently, there were a hundred Home Edders in our group but unfortunately we weren't all seated together so we didn't get to meet many of them. The show was OK, The Girl thought it was aimed at younger kids as she found some of it a bit 'cheesy'. The premise of the show was that 3 people were teaching the horrible bits of history to the children and a school inspector type-person had come along to make sure they taught the nice bits about the Tudors and didn't upset the children. The actors weren't the TV cast and it was a schools performance with school related jokes. My kids didn't seem to think they'd learnt anything new - but then they've watched all the Horrible histories on i-player anyway. I learnt that Mary Queen of Scots wasn't the same person as Mary, daughter of Catherine of Aragon! (Don't tell my dad I didn't know that already ;) The 3D stuff in the second half was fun and there were a few goo laughs, but I'm not sure I'd go again :)
The day before that, we had our first ever visit from the LA. We live in an authority where HEers have a good relationship with them and they actually try and help us. I'd consulted my kidlings as to whether they wanted a visit or not and informed them they didn't have to speak to her or show her anything if they didn't want to. We've actually met her before so I knew beforehand that she is friendly and supportive of HE. Well to be honest, I didn't get much of a word in .They showed her their latest Lego models and sewing projects and then The Boy pulled out every lapbook they've ever made. It was a really easy visit and the kids enjoyed it and the lady from the LA seemed to enjoy it too.
I know lots of people don't like home visits, and I'm not sure how I would've felt about it if i hadn't met the lady before and also heard from other local families about their experiences of her visits. Personally, I found a visit much easier than having to write a letter or ed. phil. - my main worry was that I hadn't vacced up that morning.
The kids have actually had coughs this last week or so which has meant that a lot of their usual activities have been missed, but they seem on the up again now thankfully. Thursday, they went to Little Ninjas as usual. The Boy has moved up a group now so we're only there for an hour instead of two. While I miss sitting chatting with other parents, and they don't get to play with their friends the same, it does mean that they get maths etc done before we go. We went to town afterwards because I want a watch. It's probably about 20 years since I last owned one and I was really surprised to find that I can't find a wind-up watch for less than £300. Obviously, that's far too much money for a watch that I'll probably lose, but still. This getting older mallarkey is really setting in now.....
We had a mostly-at-home day today. The day started with some woolly garden squatters 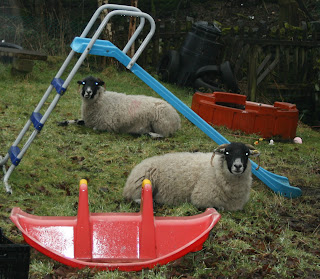 We're not quite sure how they got in, the gate was fastened and everything :?
The Girl was a bit upset because they'd trampled on her garden and eaten the flowers off her primulas :( Luckily, she hasn't planted her new plants yet.
Today was a day for Hama beads it would seem :) 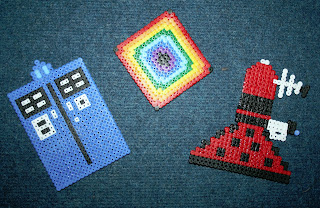 They've also done maths, English, listened to The Fearless Treasure, music practise, visited friends, been to scouts and started preparing for a singing exam - actually that was The Girl. The Boy visited friends too, listened to the book and did some maths but mostly he has done Hama beads :)