Today was declared an at-home-day as we have been out every day this week so far and will be out early doors for a choir competition tomorrow too. We had a singing lesson on Monday - The Girl is preparing to take Grade 3 Musical Theatre. I will be busy for the next few days making costumes...I have to confess, this is not what I expected for a singing exam. I thought singing exams meant that you just stood there and opened your mouth and let out sweet, sweet music, but no! Musical Theatre is a different fish altogether - she needs costumes and acting skills and all that mallarkey. Not that I'm complaining mind. It's right up her street and she has worked out some lovely routines for her songs. I just hope that my costume bodging making will do her justice...

Tuesday we had book group. We had read Lucy Willow by Sally Gardner. It's a fun book to read aloud - there's lots of scope for the character's voices, the chapters are quite short and the action moves at a good pace. It's all about a little girl who lives on a train and has green fingers. Super green fingers really, as her plants grow inches overnight. There are baddies and not-so baddies, cool pop-stars and footballers, nasty and nice teachers, good friends, a baby brother called Stench and a pet snail called Ernest. Both my children enjoyed it, as did the other children in the group. The story inspired lots of artwork and we left an appropriately seasonal display in our local library :)

On Wednesday we had our local themed Home ed group session. The activities were based on the polar regions and we were visited by an Atmospheric scientist who brought along some equipment and gave us a talk about his work and the extremely cold places he has visited. He did an experiment to make a cloud in a bottle - and it worked!!! He also had a digital machine that measured the particles in the atmosphere. The readings really jumped when he put smoke in the room with a lighted match, but I think the ugh! bit was when he showed us the change in the readings caused by us all entering the room - all those dead skin cells :/
Trying on cold weather gear was great fun :) 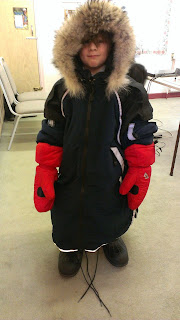 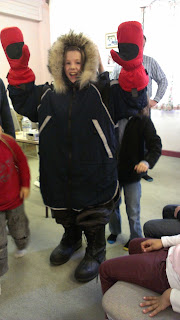 They went on to do some other activities after lunch. There was penguin drawing, penguin lapbook-cum-poster, activities to show the differences between the polar regions, an arctic animal quiz and an activity to show clothing and insulation properties. There was also lots of playing outside in the sunshine.


Thursday we went to the martial arts group, home again, then out again to choir.


So today, being Friday, we took it easy. The Boy built a Technic Lego cherry-picker, the Girl made jewellery and I read The Fearless Treasure to them. They practised their times tables - The Girl has pretty much got them all except for the 8x table. (Why is 8x6 and 7x8 so hard to remember? I had trouble remembering them as a child too.)

And  finally, after 2 years of planning and many months of saying 'I really must get round to it' - I finally got round to it :) We now have a timeline that goes beyond the year 0 running up one side of the stairs...
.. 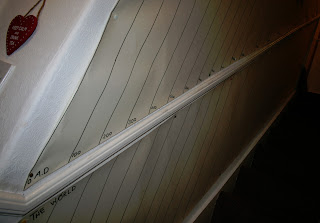 ....to join the one that leads up to year 0 running down the other side of the stairs :) 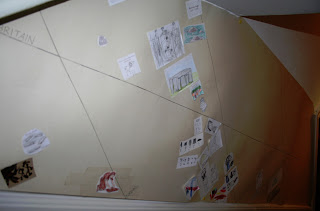 It's not very pretty - yet - but it's there and I'm looking forward to filling it. The Boy made a good start, by adding what he considers to be the most important event in the last 2013 years - 1963, the 1st Doctor Who episode ;) 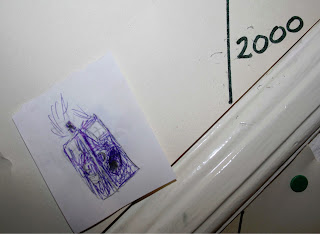 Do you have a timeline in your house? What would be your must-have event of the last 2013 years on it? I would love to see pictures of timelines and how they work for you - just in case I have to rejig ours :)