It's been a while since I posted. Not because we haven't been doing anything, more because we've been busy :) We've been camping in Norfolk, visited west stow Anglo-saxon village, been to weddings and birthday parties and played lots. education has been happening but not often in a tangible 'Look what we've been studying' way.
Today, I realised just how much my little girl is growing up. She's been ever so helpful round the house and we ended up in pinnies making tea together. She really enjoyed herself and so did I. 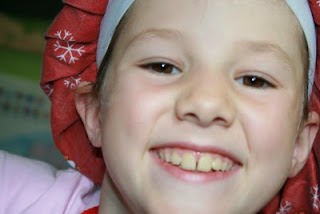 She even went to the shop for bread flour and baked bread all by herself as we chatted away. She's decided now that we should always make our own bread :) We even stopped for a cup of tea, which she insisted was made in a pot and served in her china cups :) 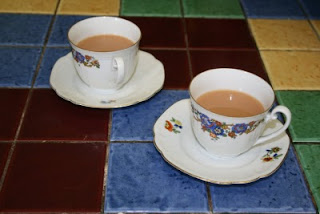 It was a very reassuring time of what the future might hold. I have to admit we clash quite a lot and I'm rather dreading her teenage years. Today has helped remind me that it's not all doom and gloom. I look forward to more afternoons like today :)
Posted by Belzi at 00:24