....to all the changes that go with The Girl doing one day of college a week. I didn't think it would have as much impact as it has done. Boykin is also out of the house for almost a full day a week too, but on a different day. He's taking part in a Bronze Arts Award group and then goes to his friends for a few hours afterwards. I'm juggling tutoring on one of those days and on the other there are two lots of music lessons to fit in as well.

I'm trying to ensure that The Girl still gets some positive HE group experiences in this last year at home so have organised a few theatre trips and a museum takeover day in the next couple of months on top of the usual groups that we do. I'm finding that she doesn't want to go to all the groups anymore because she has so much studying to do for upcoming IGCSEs and music exams. This can be a bit tricky when Boykin does want to go, depending on where it is and how long we will be out for, of course. Tuesdays were our at home pyjama day for a while but so far, it doesn't seem to be happening that often anymore :( I think our pyjama days will now be tied in with school holidays and I think we're really going to appreciate those holidays this year.

Despite all the nearly-daily activities that they do, we still had time to take a day out to Lyme Park in Cheshire as part of The Girl's studying of Pride and Prejudice. It's the stately home used as the exteriors of Pemberley in the BBC series that starred Colin Firth. It's well worth the visit. We'll be going back again because we didn't get time to see much of the park and when we were still only halfway round the house there was a fire drill.

Boykin was given a trail sheet to take round the house which he enjoyed and which encouraged him to look at things in more detail. There's a wonky fireplace; a secret panel so that the family could spy on their guests; a library where you can sit and read books; a writing desk where you can write letters that they will post for you; a butler's pantry where you can have a go at cleaning the floor; a nursery where you can play with the toys and rearrange the dolls house and a school room where you can play a piano and leave a message on the blackboard. As usual, we took our time and made the most of everything :)

We enjoyed the gardens and then went to the playground. It was pretty late in the day so we had it all to ourselves which was fun for me because I get to climb up the towers and stuff too ;) 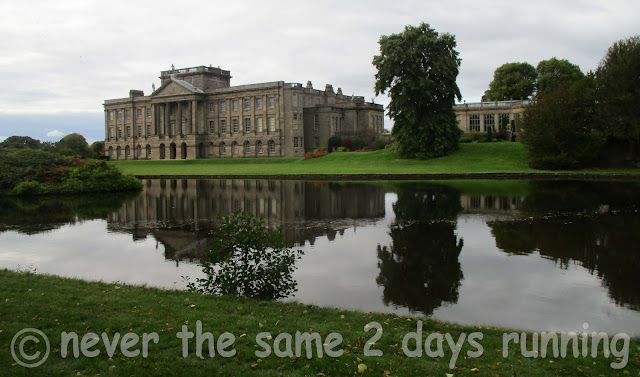 Email ThisBlogThis!Share to TwitterShare to FacebookShare to Pinterest
Labels: curriculum, days out, English lit, general HE, life in general, museums