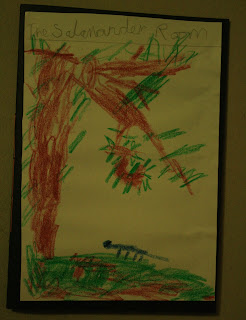 The Girl chose The Salamander Room

as our last FIAR book before Christmas. I looked in the FIAR Vol 3 manual and saw that it was very light on certain days and realised we could do this book in 3 days - which was handy because we were out and about 2 days last week :)

It is the story of a little boy, Brian, who finds a salamander in the forest and takes it home to keep as a pet. The rest of the book is a conversation between him and his mother about how he will care for the salamander.

We briefly discussed the mother/son relationship as recommended in the manual and concentrated on the Language Arts activities instead. We looked at parallel construction  and used a mini-book from HSS for The Boy. Meanwhile, The Girl wrote a short story that involved a change of setting. We also discussed reading for knowledge and looked at some of our non-fiction books that had entries on salamanders.

They enjoyed the Art activity in the manual (as always). We looked at the pictures and they noticed for themselves how the illustrations spill further and further out into the frames which made that day go very easily. The Boy made himself a minibook and then wrote a short story which he illustrated in a similar style, with the pictures slipping further and further into the surrounding frames. 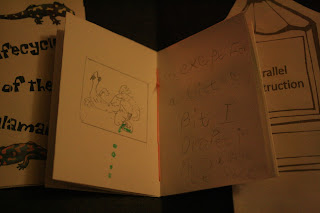 The Girl devised her own activity. She looked at an old book on sketching and used the ideas in it to draw something from nature with a fantasy twist. She thought that the illustrations spilled more into the frames as Brian's fantasy grew larger and so she wanted to incorporate fantasy elements into her drawing. 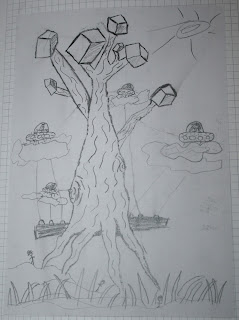 We skipped the Maths section completely and went straight on to the science activities. We went on a nature walk, not on the beautiful sunny Autumn afternoon when I suggested it. Oh no, we had to go the next morning in the rain :/ Actually, it was lots of fun. They put their wellies on and declared it a water walk and splashed through puddles and squelched in mud. Very amphibious ;)

Back home, we talked about vertebrates and got out a pack of Animal Families

cards, dividing them into vertebrates and invertebrates, along the lines suggested in the manual. We also looked at the lifecycle of the Salamander and its place in the food chain. The Girl did some beautiful illustrations and The Boy did a minibook from HomeSchoolShare.

Seeing as how The Boy only had 3 minibooks and a picture, we made a Really-Mini-Lapbook which basically consisted of a piece of A4 card folded in half. We stuck one minibook on each half and then sewed his story into the middle, like pages :) He's very pleased with it. 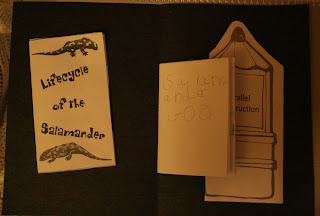 We watched a 1920 film showing the development of a salamander from egg to adult, and were sent a link to this catchy little number from a friend. I think this song inspired the Boy's story. Thanks J :)

After all that, I thought it would be fun to go and look at some real salamanders. They're not native to this country so I rang The Manchester Museum to see if they had any in their vivarium. They were very helpful and I booked us in for a vivarium tour.

What a fab day we had!!!! We were the only people on the vivarium tour and this gave us the chance to see lizards and chameleons close up and out of their tanks. We even got to see the chameleon being fed, I was so excited I clapped (blush). The museum staff were great, very friendly and enthusiatic about their work. I never knew amphibians could be so interesting :)

Then, as the salamanders aren't on public display, we were taken into the back room where they care for and breed many rare species of amphibians - mainly tree frogs - of which we saw some amazingly colourful ones, some that had been thought to be extinct until recently. And we got to see some fire salamanders from Corsica. Fantastic! The kids said it was their best afternoon EVER ;)