Fun with The Queen's Knickers

I seem to get lots of email newsletters from various companies that I have at one time or another signed up for and then generally ignore :/ One such came through from Random House Publishers and The Girl saw it and wanted to open it as it was obviously about the jubilee. She was most amused to see that they were promoting a Queen's Knickers activity pack which she insisted I download.
Then, lo and behold, while mooching in a charity shop in a town I've never been to before, what did I find but a copy of The Queen's Knickers

for 29p :0)
Obviously this meant that my two had to spend the afternoon making Queen's Knickers bunting which now hangs pride of place down my newly painted stairway. 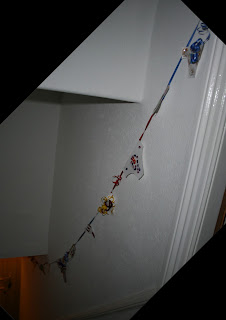 They both wanted me to blog about this bunting and gave me a grand tour of knickers so that I could name each pair ;0)
I think they have a great future in Knicker design :)
P.S The Boy enjoyed the story.
The Girl's verdict- It's a bit of a weird story because there's a problem which you expect to be solved inthe rest of the book, but it gets solved on the next page and then the book just goes on about the knickers. Also, why did it have to be that the Queen went to their school? Couldn't she have gone to their house instead?